Reading through the TIAS blog for today, I discovered Maureen from Oz had suggested that it may be a platypus and it put me in mind of the first cat we had when we first moved here.  He came from next door as a kitten.  We had duck on Christmas Day and gave him bits at lunchtime.  He spent the whole afternoon stretched out in front of the fire (along with all the men of the family in chairs) asleep.  He became known as the Duck Filled Fatty Puss!!  Unfortunately he was killed the next year on the railway line.  The first of a long line of kittys!

Anyway, I digress.... Maureen, I hate to say it, but you got your Rabbit a few years ago!  I named mine Campbell so I remember!!  So you can't have a fattypuss this year!  It's definitely Barmy, my Beaversquirrel!

Incidentally, another little known fact about Beaversquirrels in winter, is that they can turn white at the sight of snow!  We're sure that there are some outside of Young Sir's house, but, with 5 inches of snow this morning, no-one can tell!  Like the Scottish Loch Dragons (MacVroom, in 2013!) of a few more years ago, that fly only when it's raining, and the Albino ones only fly when it's snowing so you can't see them, the Beaversquirrel turns white and sits on the tree branches in plain sight!  The rest of the year they're leaf coloured!  I'll show you once I've spotted them when I next go up to Scotland!  Eek!! That's made me realise I only came back to tatting 9 years ago!!  Hadn't done any since I left school!  In 2013 Jane's TIAS was the Pram, I asked if I could join, and the reply was.... "of course you can, you daft moo"!!  Anyone who has the audacity to call me a daft moo is either bonkers or as sane as I am and definitely deserves to be a friend!  Tat's just given me a thought.... do I change his name??  Barmy or Bonkers??  He could be Bonkers because it's snowing in Scotland, so his brother has turned white and is busy bonking people on the head with snowballs!!

So, here's how far I've got with Barmy or Bonkers! 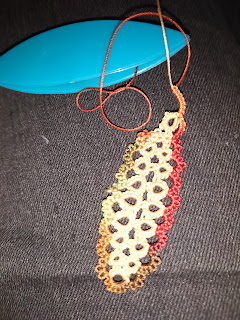 Tat It And See

Now I know I'm known as a Teller of Tall Tales in this part of Yorkshire.  I've just sent my Day 4 offering to that TOG down south, modelled once again by the cat who insists on being on my knee if I'm sitting down and she's indoors!!

Anyway, this storyteller has a cat rather than a dog.  I have already told my crazy TOG friend this story, but I'm sharing it with everyone here as well....

So, we were supposed to helping (socially distanced and with full PPE provided) out today, but thanks to the weather we’re not, we’re staying home safe!!  It’s given me chance to do my Day 4.
I realised it's not an EFUS!!
I have now decided what this is.  It’s a Beaversquirrel!  Beaversquirrels are extremely rare which is why you have never heard of them.  They are found in the denser forests of the Scottish Highlands where there is an abundance of waterfalls and fast flowing rivers with lots of trees on the sides. Beaversquirrels live in the trees along the banks and hide in plain sight because they’re camouflaged!  They have the tail of a beaver and the body of a squirrel, hence the name.
Here’s my Beaversquirrel so far:  His name is Barmy because he’s the amalgamation of ideas between 2 barmy TOGs one in Stratford and one in Yorkshire!! 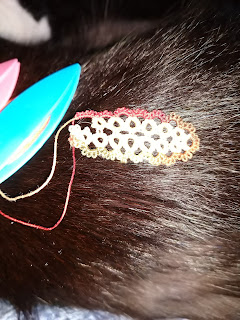 Ok Peeps can someone please explain to me why I look at the destructions for day 2 and promptly put in extra picots on EVERY ring??

Yes, I'm the bonkers TOG that did that!!  Not only that, but I started a second one and did exactly the same!!  It was when I was at the end of Day 1 for the second set that it dawned on me!!  So, that was cut off and the first one was undone!!  How crazy can I get?? (Don't answer that.... I'm totally crazy, I already know!!)

Anyway, I've redone that one, and will get around to redoing the second one, maybe a pic tomorrow!  This part is modelled by the cat!  My semi permanent laprug in the winter!!  I'm still thinking it's my elephants foot.... you can see the toes!! Lots of toes!! VBG 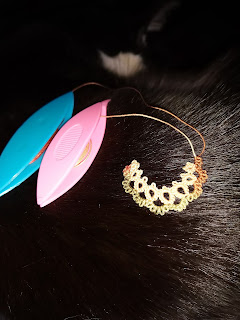 I do love it when a certain TOG friend decides to run a TIAS. We've missed them!! If you don't know what I'm talking about head over here. My contribution for yesterday is below. I've decided it's definitely an Elephants Foot Umbrella Stand this year! Jane loves to tease us, but it's my decision!! Those of you who remember will know that every year it's my guess till it's obviously not... I'll get it this year for sure! On other levels, we're still in the lockin here in the UK. Only go shopping once a week for the longer lasting essentials, and things like bread when I run out. Catfood is usually what I run out of.... depends on the weather as to how much the cats eat indoors! One cat has moved down the street because they've a catflap thats permanently open and food down all the time. All the street cats go and help themselves, we call it Cat Cafe! They get to socialise more than we do!! Anyway, here's my EFUS after Day 1.... He's allowed to stand on the laptop until he gets too big and heavy for it!! VBG 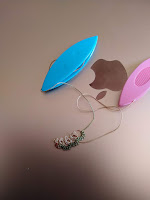 New Toy!!! A new plaything! What is it you ask? I know because I can hear you... LOL As soon as that lockin thingy stopped here in the UK I decided that my 15-16 year old laptop needed replacing. It's ancient, it belongs in a museum, it still works, albeit very slowly, I can't upgrade the software on it any longer, and there's stuff on there I use regularly! Its on it's umpteenth new battery, the charger died.... every time it went flat it had to go live upstairs for Sir to charge it.... So, it's been sorta replaced, it's still here because I've not got the right lead (yet) to drag files from one to another.... However, I'm now the proud owner of a brand spanking new, glitzy, shiny, metallic gold Macbook Air!! Now I can update on here without having to resort to either typing on my phone or opening up the software on the screen, typing, saving, opening on phone, inserting pics, saving, then posting!! Im back to being able to do it all in one move!! Brilliant! When the case arrives it may just have to have some tatty bits on it!! LOL Just in time for that thing the TOG from 'down south' was on about the other day... I'll be able to comment, send pics etc soooo much easier!! LOL. She'll be bombarded with emails from this TOG!! VBG 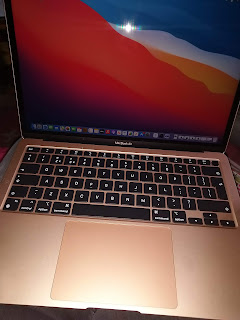 One get when ones husband gets a 3d printer?
Well, because Sir was finding out how it works... I received the top pic! Yes I have used both of them!
Then he decided to try a different material.... A quick email to that 'tatty OG down south' and another to Tim Tats Too ensued and within 15 hours I received the second pic!! Now to try it out!! 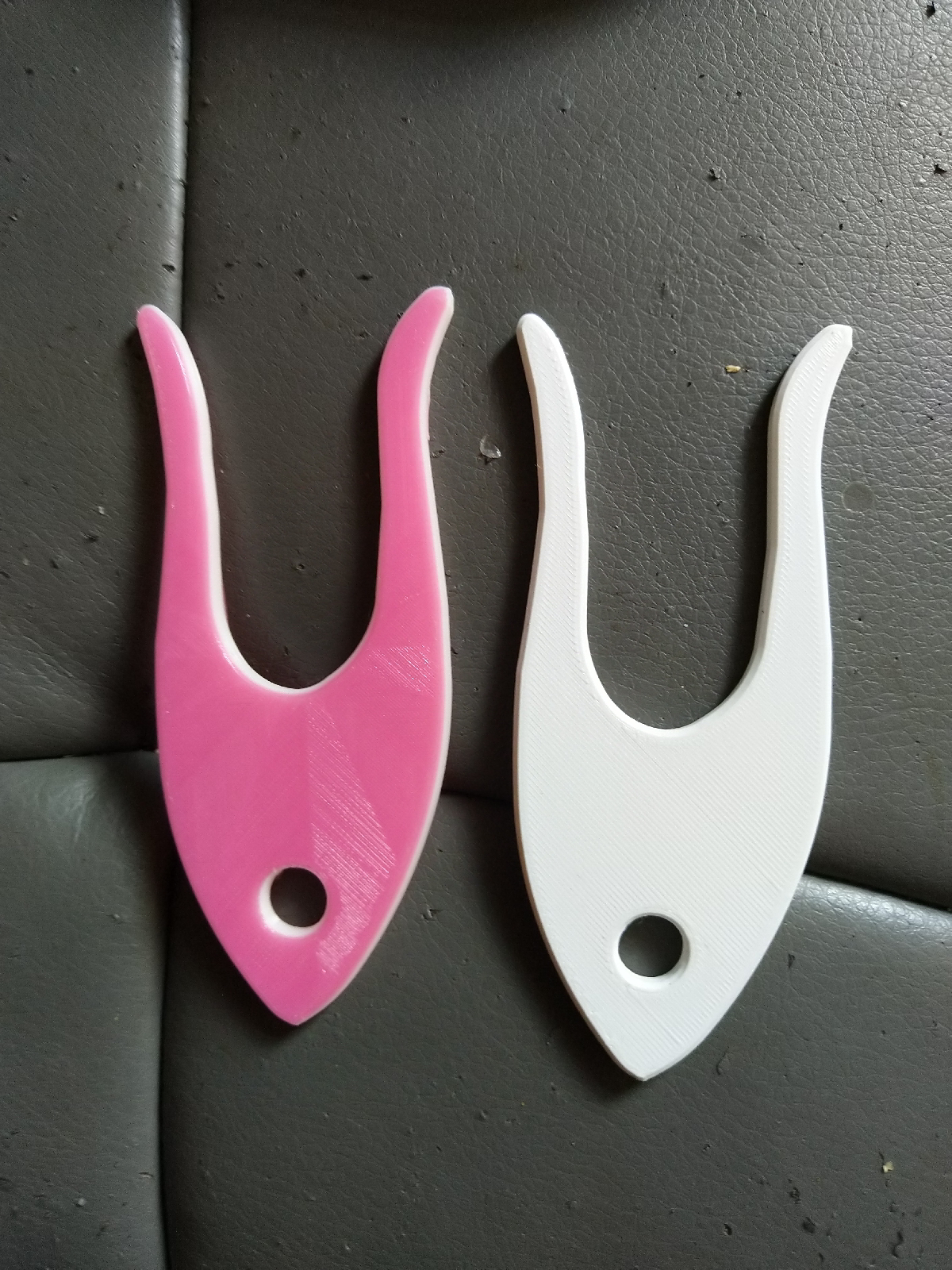 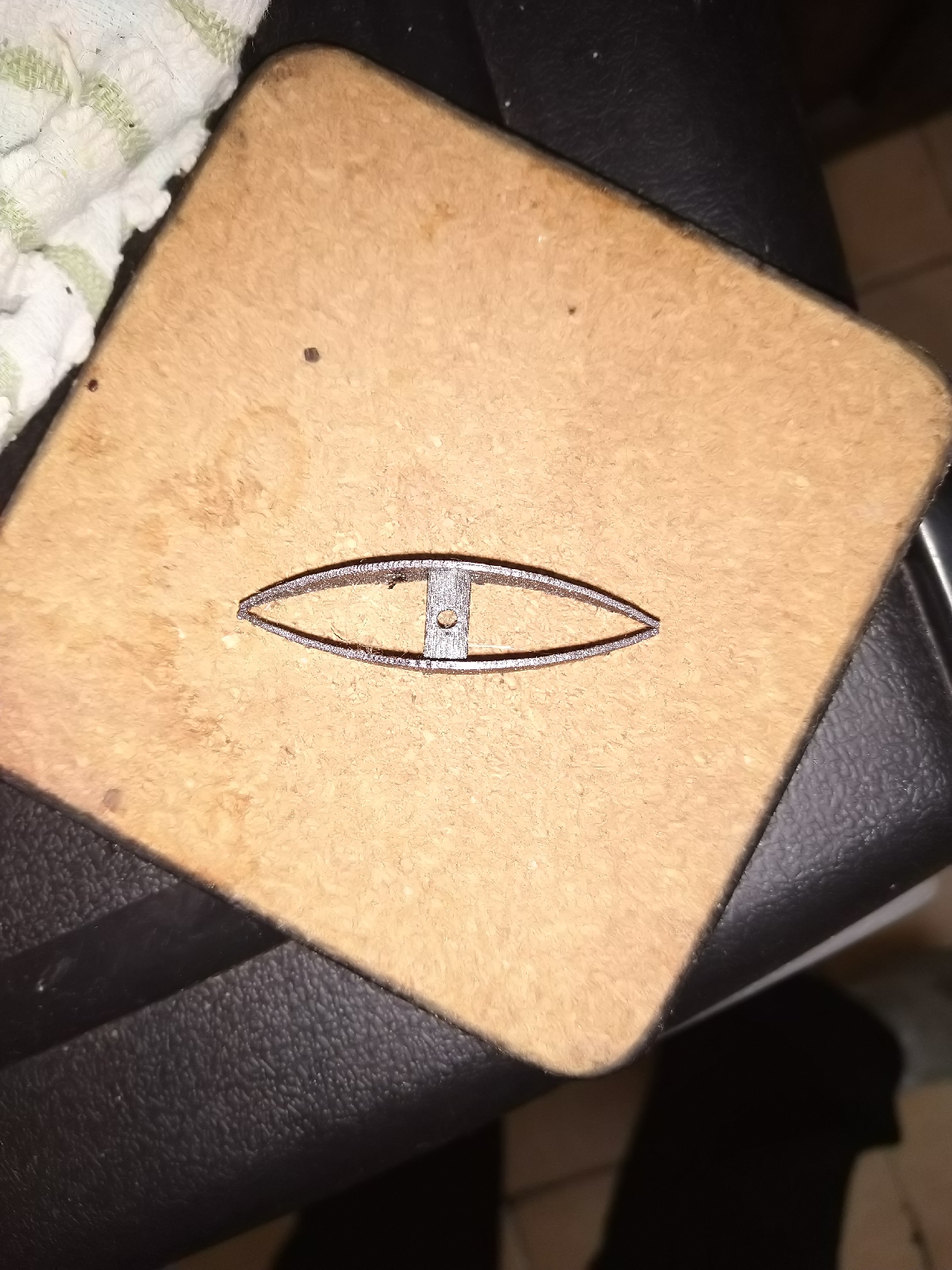 Have been my life for the last 3 weeks! Miss me?? The dig was in the village on the scheduled ancient monument and was the Roman Civitas of Petuaria. The forum hasn't been found this year, but there's evidence that a high status house was built on top of it! We hope anyway! We've proved historians wrong, Petuaria was definitely thriving after 200 AD!
Anyway, nuff of that... I'll show you a couple of pics at the end!
Granddaughters are brilliant aren't they? They get jealous! Big Miss got a huge blanket when Lil Miss was born, I know you will remember! Anyway, lil miss wants one too. But they can't be the same!
During lockdown I came across the remnants of the yarn from the original blanket. Then saw a tube vid on Mosaic Crochet! Great way to use oddments! So, during less busy times on the dig, and between tea and bed I was crocheting... The crochet is coming along....
Chat later! 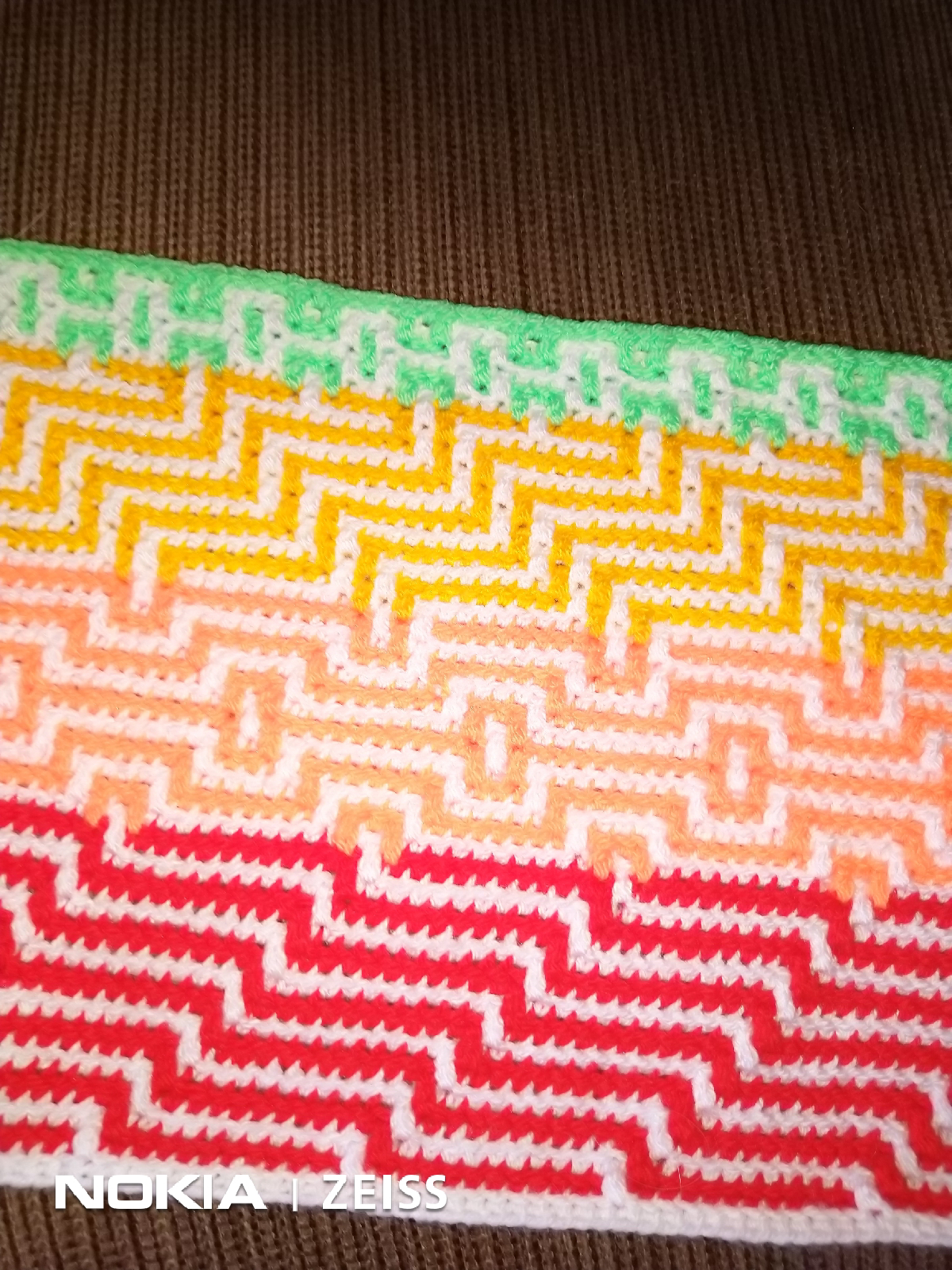 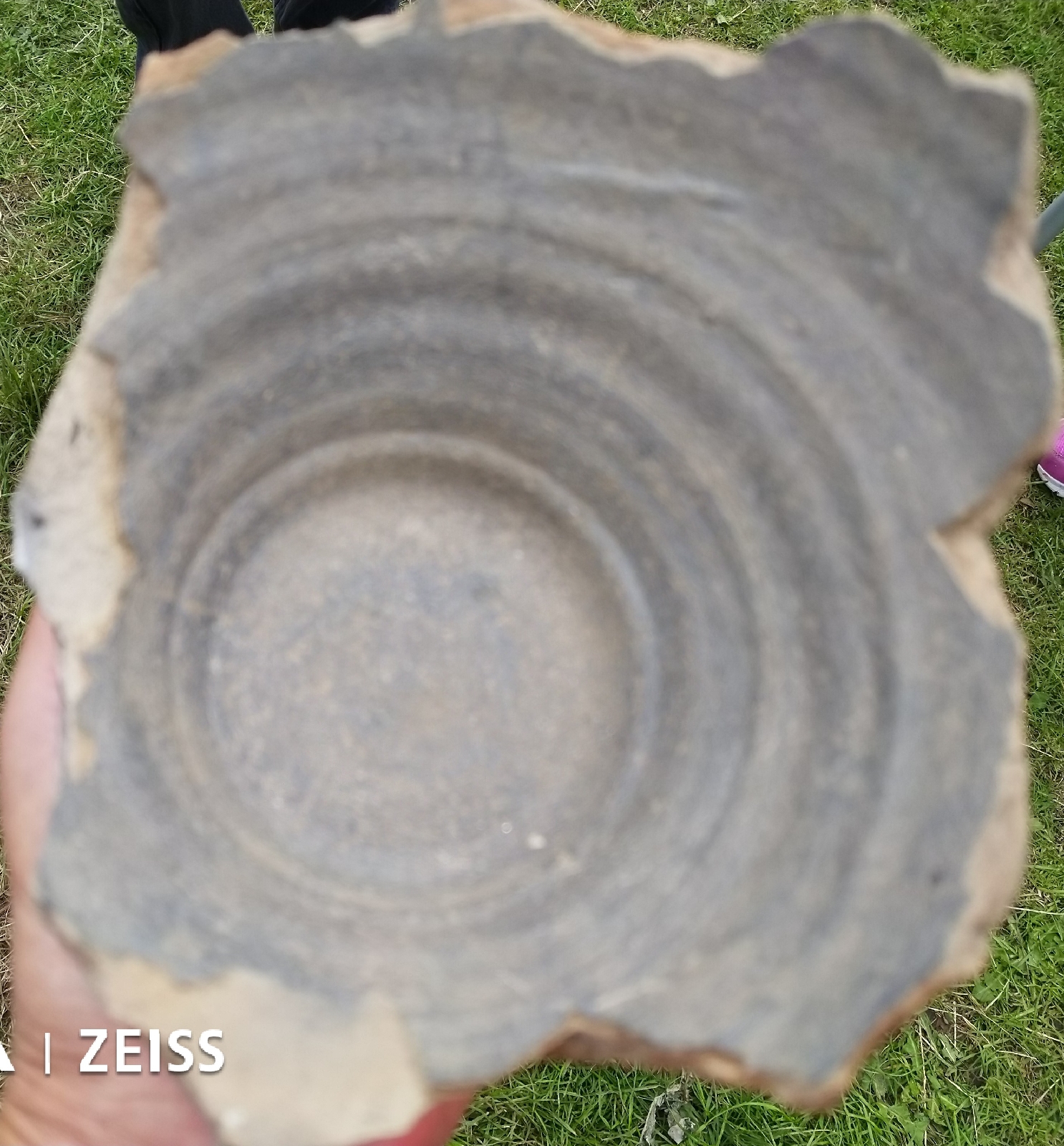 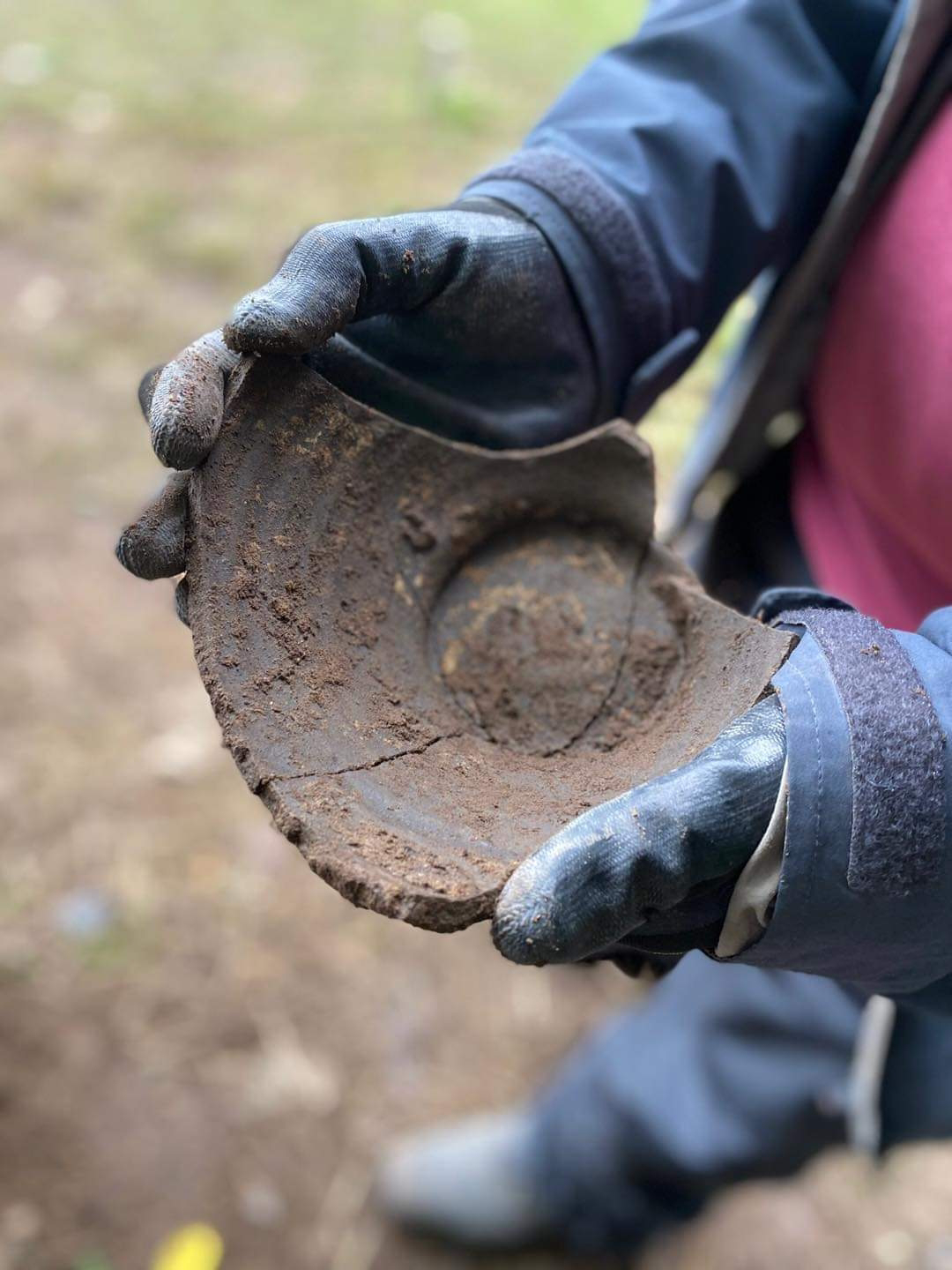 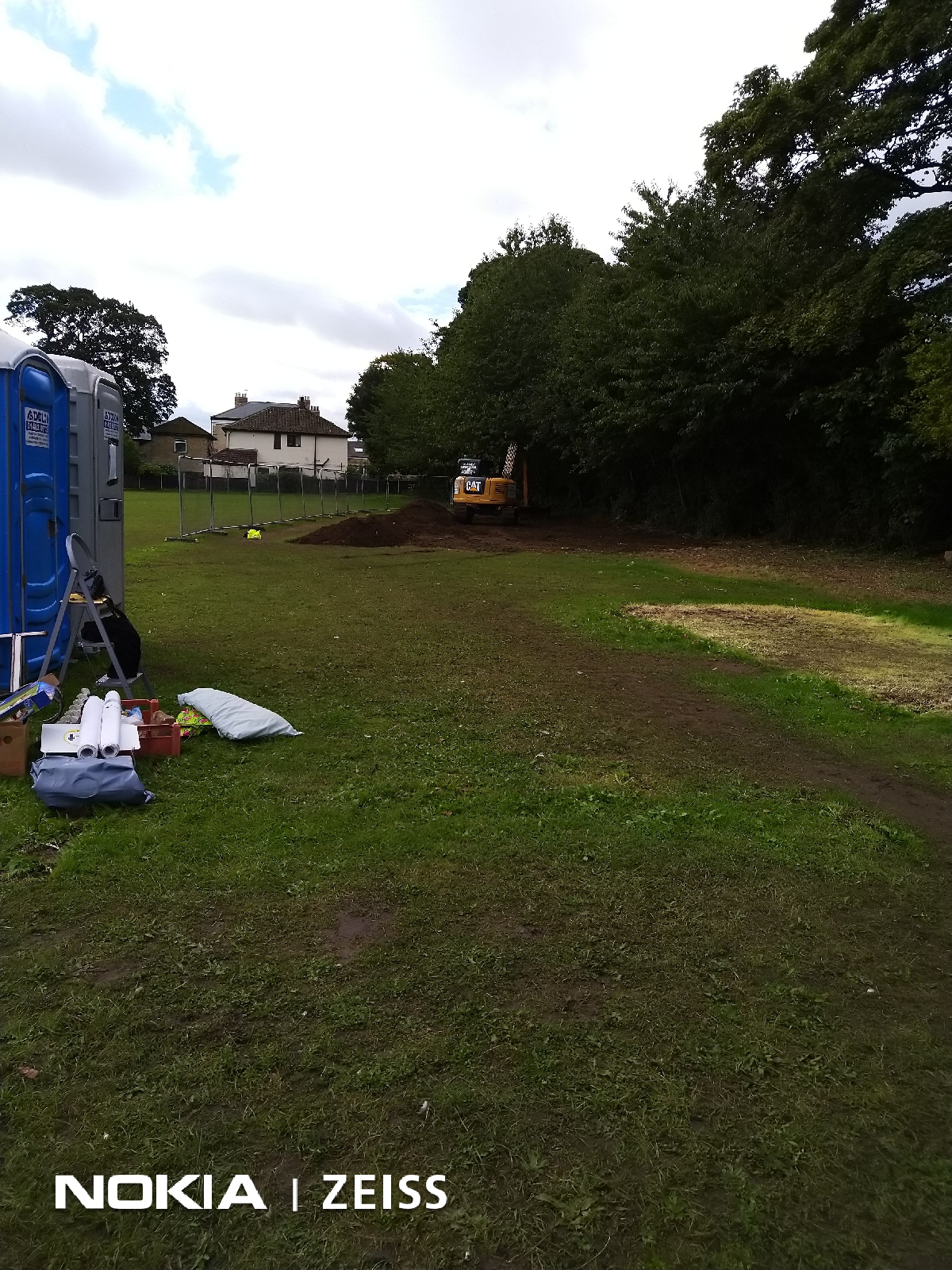